Well, the table was new in July - then the chairs were new/old in August, then I finally re-did the chairs in September.. Yes, I am just getting around to posting about them.
Our old dining set was a craigslist purchase that I re-padded and re-covered, and I liked it. But it just wasn't the right piece for our tiny dining room. It had to be pushed up against the wall or else you couldn't walk around it to get to the slider - but that also meant that anyone taller than 5' 9" would hit their head on the chandelier (Adam is 6' 3"). So it just wasn't right for the space, so back on craigslist it went getting more than I had paid for it! So we were dining table-less for a month or so. I had been eying a new table from IKEA so so once we made the trip to IKEA it was mine! I had been looking at it online and the price was $159- yikes! But I justified it because we had sold our old set. :) When we got to the store the price tag said $179! WHAT! So I had my friend Josh pulled up the IKEA site on his iPhone {I was sure that online it was cheaper!} and sure enough the price was $20 cheaper online, so we showed the cashier and he honored the price - Thank you iPhone! Then on the hunt for chairs..
One day while Adam and I were at St. Vinnys I spotted a set of 4 chairs - perfect! They were 25% off from $20 per chair. More than I wanted to spend. So I decided to test my luck and wait for them to go to 50% {it was Sunday and Tuesday was mark down day}. On Tuesday Adam went to St. Vinnys with his mom and.. the chairs were still there! 50% off! They weren't pretty, but I saw the potential. 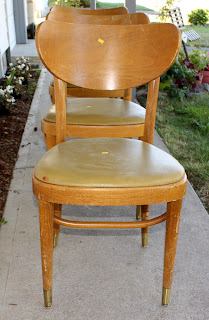 beat up, scratched, dingy... but so cute! and super sturdy! 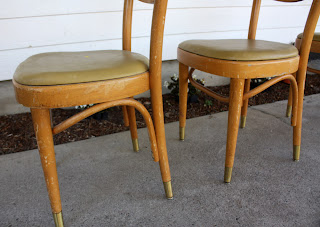 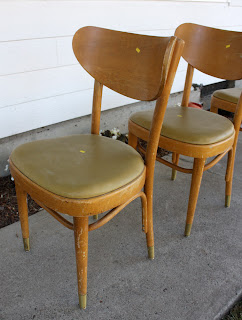 I was having a really hard time deciding what color to paint them.
I was debating between white and espresso so I did some quick photoshopping
and in the end I decided on... 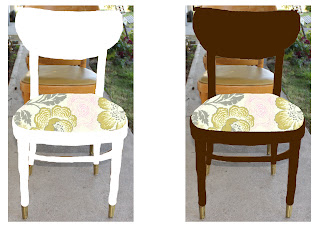 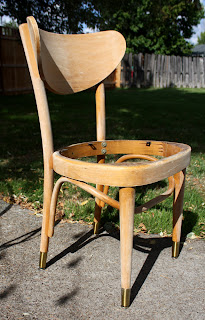 I first had to sand and sand to get some of the gashes in the wood out.
Then is was onto priming. I decided to go with spraying the chairs since there are so many curves and details - I wanted them crisp and smooth. 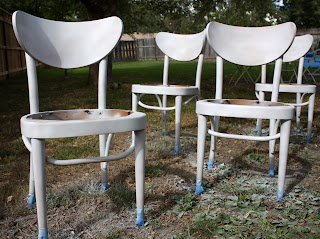 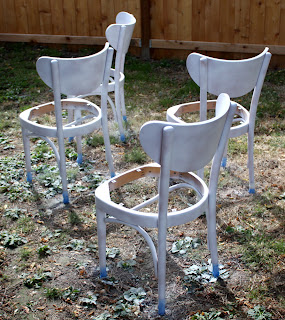 After several cans of high-gloss white spray paint,
then another coat of white lacquer they were ready to be brought inside. 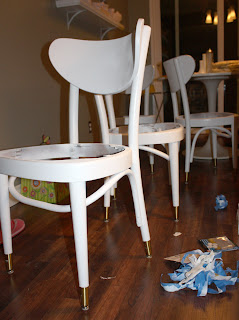 I of course ordered some Amy Butler fabric from Fabric.com that has pink, green, and gray in it - perfect for the kitchen! I didn't bother removing the old seat fabric (pea-green pleather), I just purchased some batting and did 1 new layer of batting between the old seat and the new fabric. I cut the fabric to size then staple-gunned the heck out of it! 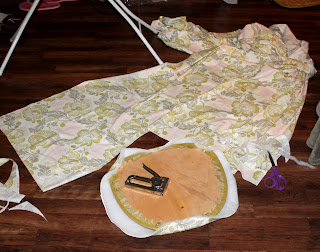 We then screwed the seats back on and stood back and admired how pretty and perfect they were! 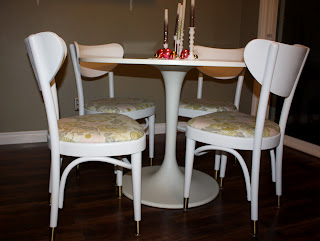 We can walk around the table now! and Adam no longer hits his head on the light! 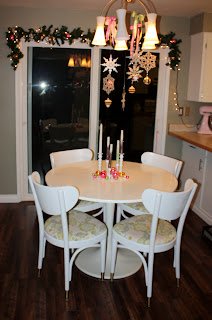 The whole set we pieced together is perfect!
Thank you St.Vinnys, IKEA, Fabric.com, and Home Depot for selling me 8 cans of spray paint! 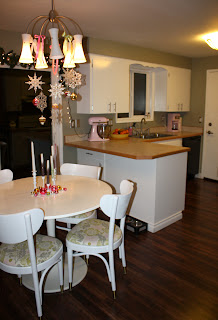 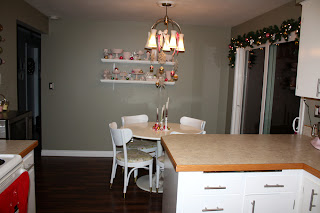 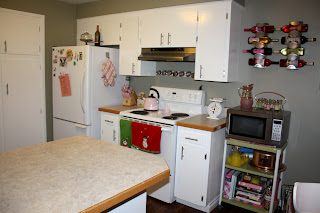 And since I am a few months late on posting, the after shots are complete with Christmas decor! 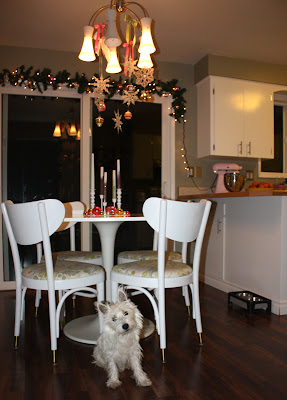 in case you don't remember what our old dining set looked like, it can be viewed here.
But trust me, this one is way better! Even Trudie thinks so!
Posted by Abby at 11:43 PM 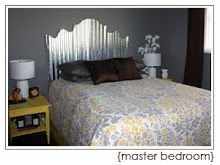 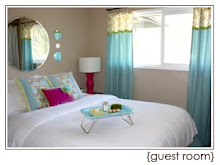 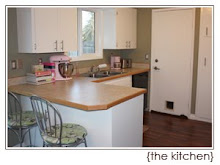 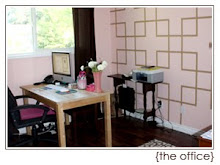 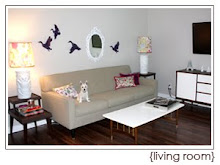